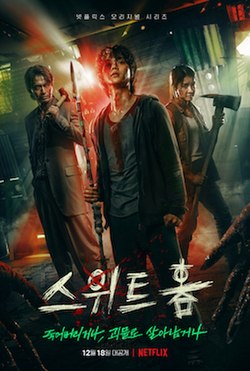 Okay, so I’ve spent a lot more time than I’d like to admit, binge watching Netflix. Especially during this pandemic?! Idk what I’d have done without it?!!! Lost my mind maybe? Interacted more with others? lol idk. whatevs.

So I’m currently watching… “Sweet Home” , a South Korean comedy/drama/ post-apocalyptic, based on a Webtoon comic with the same name, created by Kim Carnby & Hwang Young-Chan. Damn, is this shit gory or what?!? I thought that “Death of Me”, was bad, this is just downright chaos. It reminds me of something like… “The Goonies”, maybe crossed with some other Monster movie or series filmed pre – super technology days. The way these monsters and creatures move just seriously creeps me out. It’s like… the word, “Slytherin”. That is what they remind me of. Just the word though, not what the word means.

Has anyone watched it?

Is anyone watching it?

What are your thoughts?